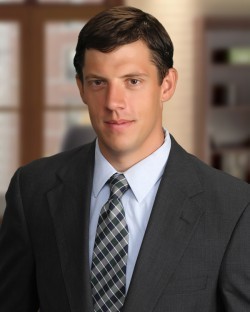 Thomas Soldan practices as a criminal defense and personal injury attorney in the Commonwealth of Virginia. He has spent much of his career as a courtroom litigator, starting at a boutique general litigation firm in Warrenton, Virginia after spending some time working with a discovery and document review group in Richmond. As a boutique litigator, Mr. Soldan gained a wide breadth of experience in both civil and criminal litigation. Joining Price Benowitz in 2011, he has focused his practice on criminal defense and personal injury litigation. Mr. Soldan was honored to serve as president of the Fauquier County Bar Association in 2012. He is also a member of the Virginia State Bar Association.

Mr. Soldan earned his Juris Doctorate from the University of Georgia School of Law in 2007. At school he was a peer mentor for international students and participated in the Special Education Clinic, advocating for disadvantaged families with special needs children. He also proved his robust legal research skills by serving as an associate for the legal research site LexisNexis, helping fellow students and journal members with legal research projects. He received his bachelor’s degree in government-law and history from Lafayette College in 2004, graduating cum laude. He received honors for his thesis on the application of world systems theory to the growth of baseball around the world, a project which combined his passions for history of colonial practices and sport.

In addition to litigating, Thomas Soldan is an active member of his community. He is a founding member of the Occoquan River Bandits Baseball Team, a wood-bat Blue-Gray League expansion franchise. The team is in a NABA-accredited league that has member teams throughout northern Virginia and the District of Columbia. A devoted sports fan, Mr. Soldan is a season-ticket holder for the Washington Nationals. He also plays baseball regularly and is an avid trail runner. Mr. Soldan has participated in races as long as 50K through the mid-Atlantic region and has participated in even longer races as support for friends, including the Grindstone 100 Mile Race, Massanutten Mountain Trails 100 Mile Run, and the Western States Endurance Run in California.