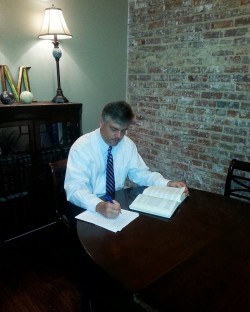 Van McMahan has over 20 years of legal experience as a Judge and Attorney.

Mr. McMahan received his B.S.B.A. in Business from the University of Tennessee at Knoxville.

He then went on to Law School at Cumberland School of Law at Samford University.

Burgess & Hale was an insurance defense firm in Birmingham, Alabama.

Mr. McMahan then formed Gibson & McMahan in Birmingham where he continued to practice insurance defense, criminal law, and many other areas of civil litigation.

Some of the major areas of his practice include Social Security, Bankruptcies, Personal Injury, Car Accidents, Slip and Falls, Worker's Compensation, and Medical Malpractice.

He was first elected Judge in 2006 and continues to serve in that capacity in addition to his law practice.

Mr. McMahan has a unique perspective on litigation because he has been involved as Plaintiff's Attorney, Defendant' Attorney, and Judge.

You can learn more about McMahan Law Firm by visiting www.mcmahanlawfirm.net and you can find it on Facebook as well.