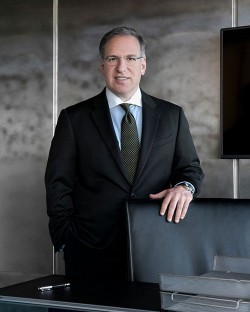 Dan Markoff was born and raised in Houston, Texas, received his undergraduate degree from The University of Texas at Austin and his law degree from Oklahoma City University School of Law. He also studied Comparative Law at Oxford University, and Spanish at the Universidad de Valencia, in Valencia, Spain.

While in law school, he was the recipient of the Raymond D. Naifeh Judicial Fellowship, and clerked for Oklahoma County District Judge Eugene H. Mathews. Prior to his law career, Mr. Markoff worked on the 1988 Presidential Campaign as National Advance Staff, and as the Immigration Coordinator for the Houston Volunteer Lawyers Program.

Mr. Markoff was one of the first lawyers in Oklahoma to represent women injured by silicone breast implants and the diet drug combination, Fen/Phen. During those cases, and others, Mr. Markoff was interviewed by CNN, The CBS Evening News, Cosmopolitan Magazine and all major TV stations in Oklahoma City and Tulsa. He also represented and assisted Lynn Starks, who with the help of State Representative Leonard Sullivan, changed the laws regarding bunk bed construction statewide, nationwide and worldwide.

Mr. Markoff has spent the majority of his career working in Pharmaceutical Litigation, representing victims of defective drugs and medical devices. Some of the cases he has been involved with include: Yaz Birth Control, Actos, Risperdal pills, IVC Filters, Talcum Powder, Xarelto, Taxotere and many others.

In April of 2016, Mr. Markoff and his wife, Nataly, were blessed with the birth of their first child, Alexander David. They are thrilled new parents, excited to enjoy parenthood a bit later in life. In his spare time, Mr. Markoff is an avid rock climber and hiker. He also enjoys spending time salt water fishing and anything else outdoors.