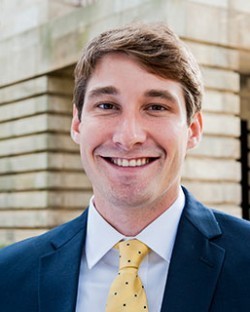 Education Lawyer
Tharrington Smith
Raleigh, NC
About Résumé Reviews Contact
Not Yet Reviewed Review this lawyer
Is this you? Showcase your career achievements and connect with ideal clients.
Premium Placement
Enhanced Features
Upgrade to Enhanced Profile

Joe is a proud native of Elkin, North Carolina. Following his graduation from Elkin High School, Joe was offered the Bernard Ramsey Honors Scholarship and followed his older brother Jake to the University of Georgia where Joe majored in History. Joe’s two younger sisters, Mary Ann and Polly Jean, would also eventually become Georgia Bulldawgs. After graduating with honors from UGA, Joe was selected to Teach for America where he served as a charter corps member on the Big Island of Hawaii in Kailua-Kona. During two years in Hawaii Joe taught in a wide range of special education settings at both the elementary and intermediate school level. As an Eagle Scout, Joe volunteered with a local scout troop and helped integrate students with disabilities into the scouting program. During these two years Joe also attended the University of Hawaii where he earned his Master of Education, specializing in special education.

Having always had an interest in the law and realizing its impact in education, Joe decided to return home to North Carolina where he attended the University of North Carolina School of Law. During law school Joe participated in a number of pro bono programs, conducted domestic violence research in India, and worked for both the University of North Carolina System’s Legal Affairs Office and as an intern at the North Carolina Supreme Court in Justice Paul M. Newby’s chambers. During the fall of his third year in law school Joe was offered the Radboud Scholarship and given the opportunity to study European law at Radboud University in Nijmegen, Netherlands. After a semester in Europe, Joe returned to Chapel Hill where he completed both his Juris Doctor and a Master of Law in European law. Upon graduation, Joe was offered his current position at Tharrington Smith. Joe is licensed to practice in North Carolina.