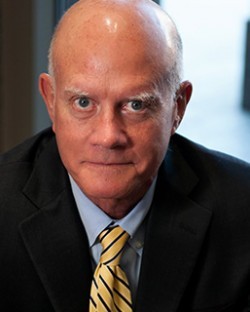 Family Law and Divorce Lawyer
Tharrington Smith, LLP
Raleigh, NC
About Résumé Reviews Contact
Not Yet Reviewed Review this lawyer
Is this you? Showcase your career achievements and connect with ideal clients.
Premium Placement
Enhanced Features
Upgrade to Enhanced Profile

Fred Morelock received his bachelor’s degree from the University of North Carolina at Chapel Hill in 1974 and his law degree from UNC in 1976. He then practiced as a trial attorney for ten years in the areas of criminal defense and family law litigation before being appointed to the bench. He joined Tharrington Smith in 2001.

In 1986, Mr. Morelock was appointed by Governor James G. Martin to a Wake County district court judgeship. He was reelected three times and served for fourteen years. In 1990, Mr. Morelock became the first judge in Wake County to become a Certified Juvenile Law Specialist. During the last several years on the bench, he presided almost exclusively in domestic court, most recently in North Carolina’s first designated specialized judgeship in the area of family law.

As a district court judge, Mr. Morelock was a frequent speaker and instructor for continuing legal education seminars for attorneys (North Carolina Academy of Trial Lawyers and Bar Association) and for judges (North Carolina Association of District Court Judges and the Institute of Government New Judges School) on various family law issues. He has also been a seminar speaker for the North Carolina Association of Certified Public Accountants and the Wake County public school principals. Mr. Morelock has served on the Board of Directors of the Wake County Bar Association and its Professionalism Committee, the Raleigh Rescue Mission, and Carolina Legal Assistance.

Mr. Morelock’s practice includes the representation of clients in all areas of family law, as well as mediation and arbitration. He is admitted to practice in all state courts and the federal district courts for the Eastern and Middle Districts of North Carolina. Mr. Morelock is a member of the North Carolina Bar Association and its family law section. He is former chair of the Grievance Committee for the 10th Judicial District and most recently was appointed by the State Bar Council to the Disciplinary Hearing Commission. He is a Certified Superior Court Mediator and a Certified Family Financial Mediator. In 2016, Mr. Morelock was appointed to a three year term as Chair of the North Carolina State Bar Disciplinary Hearing Commission.

Mr. Morelock is married to Jeannie S. Morelock, and they have two teenage sons.