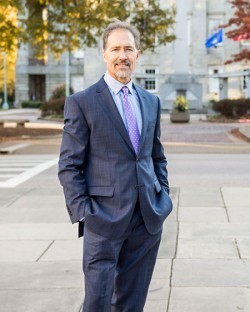 Estate and Probate Law and Business Lawyer
The Law Office of David C. Franklin, PLLC
Raleigh, NC
About Résumé Reviews Contact
Not Yet Reviewed Review this lawyer
Is this you? Showcase your career achievements and connect with ideal clients.
Premium Placement
Enhanced Features
Upgrade to Enhanced Profile

David has been a trusted advisor to businesses, individuals and families since 1990 in a wide range of legal practice areas. This breadth of experience brings depth and to his advice and informs his decision making across all his areas of practice. David spent 10 years practicing business, family law, estate planning and probate in Seattle, WA and then attended the Georgetown School of Law where he obtained a Master of Laws Degree (LL.M) in Taxation with honors.

David has represented and is currently representing clients is a wide range of businesses, including software companies, restaurants, real estate developers and builders, commercial fencing, commercial landlords, manufacturing and others. David also regularly represents individuals and families in preparing their estate plans (wills, trusts and powers of attorney) and their business succession plans. David worked for Ernst & Young, LLP in San Jose, CA in their International Tax Consulting Group where he worked on international tax projects for clients such as Hewlett Packard. Prior to law school, David worked as a chemist and then as a partner in an oil and gas exploration business in Lafayette, LA which developed oil and gas drilling prospects, raised venture capital and drilled and produced oil and natural gas. David obtained a Bachelor of Science degree in Chemistry from Millsaps College, in Jackson, MS, and his Juris Doctorate from the Seattle School of Law. David is licensed to practice law in North Carolina and Louisiana (and was formerly licensed in Washington State prior to moving from there) and is admitted to practice before the United States Tax Court and the Fourth and Fifth Circuit Courts of Appeal and the U.S. District Courts for the Middle and Eastern Districts of North Carolina.