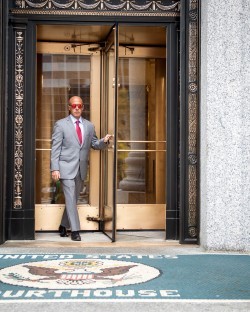 SCOTT E. LEEMON, a criminal defense attorney for over 20 years is a member of the New York State Bar since 1996.

Mr. Leemon practices primarily in the federal and state courts of New York. He has handled both federal and state cases throughout the country as well as international matters. His practice has taken him to:California, Florida, Virginia; Louisiana; Tennessee; Michigan; North Carolina, South Carolina, Virginia, Pennsylvania, Missouri, Kentucky, Indiana, Georgia, Illinois, New Jersey, France and Austria. Additionally, Scott has been featured as a legal expert on national television and radio shows.

The practice primarily focuses on complex criminal defense at pre-trial and trial level, appeals, petitions for post-conviction relief, and applications for Pardon.

In addition, he has vast experience with criminal forfeiture issues and sentencing advocacy under the advisory federal sentencing guidelines.

Scott specializes in handling a wide array of delicate matters that are followed by local, national and international press. He represents many members of the entertainment and sports industry facing serious criminal allegations. He handles these matters in all stages, from the beginning to the end.

Scott Leemon has earned the reputation as the ‘go to guy’ in the rap industry for criminal defense. He has spearheaded the successful criminal defense for members of the music community on a national in international basis. He has been featured in XXL Magazine as one of "The Rap Games Best Lawyers" and continues to represent well-known members of the music community.He has also represented members of all types of music, including a member of the Rock and Roll Hall of Fame.

Mr. Leemon can be easily reached at scott@leemonlaw.com

Scott is a genuine man who will give you his help day or night. 5 stars.

Scott is a genuine man who will give you his help day or night. 5 stars.

I had a domestic incident in Southern California in March of 2008. Scott had great co-counsel in CA. It was a serious case and I was looking at the 3 strike law in CA. Scott was able to defuse the situation, I was never arrested nor prosecuted.
Read More Reviews