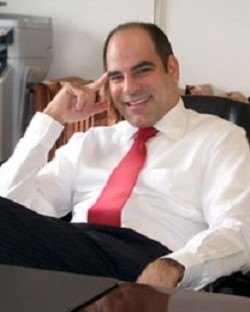 Mr. Petrus is now a member of the New York State Bar Association and is a practicing New York criminal defense attorney. He is also a member of the New York Association of Criminal Defense Lawyers and has sat on the New York City’s Mayoral Advisory Committee for the Appointment & Reappointment of Judges. Mr. Petrus is Of Counsel to Levine & Blit, PLLC, a civil law firm in the Empire State Building. Mr. Petrus first learned Spanish while staying in Puerto Escondido, Mexico, in the state of Oaxaca. He later returned to Mexico and continued traveling through Central America, Colombia, Argentina, Peru, the Dominican Republic, and Puerto Rico. He continues to enjoy Latin American culture with his brother-in-law’s Peruvian family and with his friends and clientele. Mr. Petrus looks forward to vacationing again south of the border.

Mr. Petrus attended law school at Cleveland-Marshall College of Law in the evening while working full-time as a probation officer for adult felons during the day. He received scholarships from his law school and the probation department’s union, the Communications Workers of America (CWA). While attending Cleveland-Marshall College of Law, Mr. Petrus edited and wrote for the law school newspaper that was ranked the #1 law school newspaper in the country, according to the American Bar Association. He also served in student government.

I was a client of his

I was a client of his

My name is Charles Gatling. And I hide Paul pietras about 14-15 months ago he charged me $5,550 he did absolutely nothing for me he took my money laughed in my face and walked out the courtroom as I was being sentenced by the parole judge v to 12 11 months this dude is a scam artist please take it from somebody that knows don't give him your money to pay his rent in the empire State building because that's all he's doing please be cautious of this dude man he's a scam artist he's not working for you he's working for himself
Read More Reviews