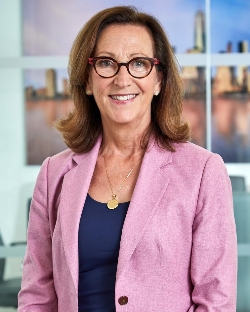 On arriving in New York City, Sandy became associated with the firm Lipsig, Sullivan and Liapakis, then the largest plaintiff’s personal injury firm in the City of New York. There, she concentrated in Products Liability and Medical Malpractice, trying her first cases to successful verdict against the City of New York.

In 1983 Sandy joined the former president of NYSTLA, Gary Pillersdorf in his firm, where she became a partner in 1985. There, she continued her career as a trial lawyer, trying many cases to verdict. She worked on multiple complex plaintiffs’ personal injury cases resulting in multimillion-dollar verdicts and settlements, including the landmark case of Delosovic v. City of New York, which culminated in a $25,000,000 jury verdict in a complex case that involved a roadway defect and a products liability action.

In August of 1997 Sandy partnered with Ms. Moin in order to create a firm that is known for meticulous legal work, personalized representation and outstanding results. Sandy has represented plaintiffs at trial on scores of cases and has obtained many 7-figure verdicts for her clients.

Sandy has been involved in many landmark decisions, including a Labor Law case that was cited as one of the ten most influential Labor Law cases of the decade.

Sandy is frequently known by clients as being “The lawyer in the family”. She is always ready to provide assistance and referrals for all of their legal needs.

Sandy’s hallmarks are her excellence as a trial lawyer, her creativity and out-of-the box thinking. Her clients find her easy to communicate with, and willing to fight for their rights even in difficult situations. Sandy frequently prevails where others fail. Her clients can rely on her to know her clients and their cases inside and out.