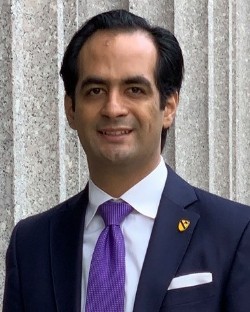 Jose Xavier Orochena received a Bachelor of Arts from SUNY Albany and a Juris Doctor from Nova Southeastern University Law School. Jose Xavier Orochena served as a State's Attorney in Florida and established his own law firm with his wife and fellow attorney, Rebecca A. Orochena. As an impassioned immigration attorney, Jose Xavier Orochena, was highly sought after by the media for his legal analysis during the immigration crisis involving separated mothers and their children during the Trump Administration. He has appeared in all local New York Newspapers, to include the NY Times and El Diario. Jose Xavier Orochena has also appeared on MSNBC, CNN, Fox News, Univision and Telemundo and Spectrum NY 1. Jose Xavier Orochena was also featured on WYNC - Public Radio.Jose Xavier Orochena is recognized as a tireless advocate for his clients but particularly for the most vulnerable clients - the poor and the weak just like his grandmother who immigrated to the United States with nothing but a dream of getting a small slice of the American Dream