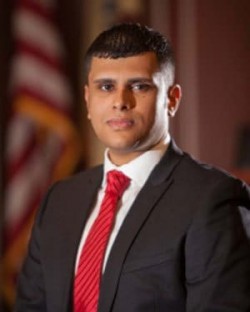 is an attorney licensed to practice in New York and New Jersey. He was a graduate of University College at Rutgers in 2009 and Rutgers School of Law-Newark in 2013.

During his college years, Mr. Patel who entered through the EOF program, was a highly decorated student leader, serving as the University College Student Government President for two years. In this position, Mr. Patel served on the University on the Middle-States Accreditation Committee, University Budget and Finance Committee, Rutgers-Newark Honorary Degree Committee, and gave the student commencement speech for the Newark College of Arts and Sciences & University College, Class of 2009. The video can be seen here, .Mr. Patel also participated in University Greek Life by joining Sigma Lambda Beta, International Fraternity Incorporated.

In 2010, Mr. Patel had served as United States Senator Cory Booker’s Correspondence Secretary in City Hall in Newark during his term as Mayor. There, Mr. Patel operated and managed the correspondence system for the Mayor’s Office, which included oversight of the Mayoral signature. He assisted in drafting and maintaining a uniform political message for the administration. Mr. Patel held daily private meetings with the Senator to draft correspondences and manage policy issues.

In 2013, Mr. Patel served under the Hon. Sherry Hutchins-Henderson, J.S.C. as a Law Clerk in the Superior Court of New Jersey. There, he assisted the Court in managing motions, appeals, and trials touching upon criminal matters in Essex County. His responsibilities including drafting and briefing the Court with bench memorandums and proposed opinions. Mr. Patel worked with the Court during multiple high-profile trials where charges included homicide, drugs, weapons, and robbery.

In 2015, Mr. Patel worked with E. Waters & Associates as a foreclosure litigation associate. Here, Mr. Patel assisted homeowners and investors in keeping their homes and modifying their loans. Mr. Patel also assisted the firm in complex litigation matters including those issues that dealt with the Attorney General of both New York and New Jersey.

Mr. Patel is currently a Partner at Patel & Soltis, L.L.C.

He went above and beyond. Very thorough and didn’t cut corners. Helped me save my home. Thank you.
Read More Reviews