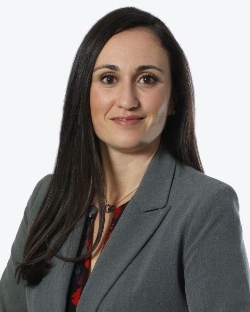 Erica Domingo is an employment lawyer certified in both New Jersey and Pennsylvania. She is recognized by her peers as an up-and-comer in the field of employment law and she has received awards including acknowledgment as a "Top Attorney" and Best in South Jersey for the past several years. Born and raised in South Jersey, Erica is glad to be serving the needs of the community where she grew up. After four years at Bernard College in New York City, Erica worked as a legal assistant prior to attending law school. Next, she attended Rutgers-Camden School of Law and soon after clerked for the Honorable Francine I. Axelrad in the New Jersey Superior Court - Appellate Division. Erica embodies Grungo Colarulo's core value of community, serving as the Secretary on the Board of the Directors’ Executive Committee for The Parkinson Council, a regional non-profit organization that works to improve the quality of life for people with Parkinson’s and their care partners. When not helping her clients or supporting her favorite charity, Erica can be found on her yoga mat or in the kitchen, cooking and baking with her two children.

Social Media in the Workplace
Spreecast
2013