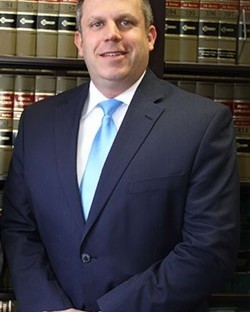 Eric Boehmer is an attorney with the experience, confidence and knowledge to deal with the authorities when it comes to defending individuals against criminal charges.

As a native of St. Charles County, Eric was born and raised in the Wentzville area. He attended St. Dominic High School in O’Fallon, MO.

Eric attended College at Furman University in South Carolina where he obtained his bachelor degree in Business Administration.

While a player on Furman’s baseball team, he was named to the all-conference tournament team and made the Dean’s list For academic excellence. At Furman, Eric also became a member of the largest international fraternity, Tau Kappa Epsilon.

Upon graduation of Furman, Eric returned to the Show-Me State to attend law school at the University of Missouri-Columbia.

He received the Cali Excellence for the Future Award before graduating with his Juris-Doctorate. Eric gained experience with internships at two different law firms and worked at the Attorney General’s Office.

The trial experience and understanding of the court systems he gained during this time were a building block that helped catapult his highly successful career as a criminal defense trial lawyer.

Eric’s passion and expertise is working in the courtroom and trying cases. He has tried numerous Judge and Jury trials with an extremely high success rate.

He has multiple acquittals in Class A felony jury trials as well as many lower level felony and misdemeanors. Eric’s proven track record and attention to detail in working for his clients has earned him the well deserved reputation as a successful attorney.

Please call now to make an appointment so that you can benefit from Eric’s knowledge and experience.