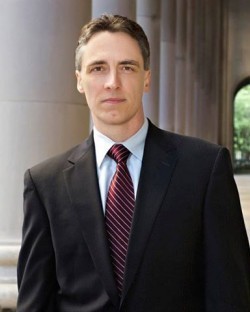 Keith Scherer is a full-time civilian military defense counsel with extensive civilian and military trial experience. Mr. Scherer’s aggressive representation of his clients has resulted in numerous dismissed charges, acquittals, and grants of clemency. For his own cases and as a consultant, Mr. Scherer has appeared in the national media many times. The national media often seeks him out as an expert on military criminal matters.

He has successfully represented members of all US military branches:

He will travel anywhere to defend US military members. He has represented members all across the US and around the world:

And numerous other areas.

And countless other charges.

Throughout his career as a prosecutor and then as a defense counsel, Mr. Scherer has focused on complex criminal cases. His cases regularly involve computer forensics, drug toxicology, and sexual assault. Because of his experience with complex cases and his knowledge of forensic issues, he has been retained to handle the appeals of military members convicted of premeditated murder.

With his help, military members facing the possibility of life in confinement have avoided federal conviction altogether. In cases where the client has pled guilty, Mr. Scherer has vigorously fought their sentencing cases and helped them receive extremely favorable sentences. As a defense counsel in the Air Force he was regard as "the master of the sentencing case" for his skills in helping clients receive drastically lighter-than-expected sentences.

During his years in the Air Force JAG Corps, Mr. Scherer’s performance reports contained numerous remarks about his outstanding work:

"a leader among fellow defense counsel" "first choice to handle the region’s toughest cases and clients" "a vigorous defender of airmen’s rights" "a dynamite, hard-charging JAG" "a consummate professional" "a consistent A+ in every area" "one of the defense community’s finest"

In his life outside of practicing law, Mr. Scherer has been a widely published baseball writer. His work has appeared in the Baseball Prospectus annual and he was a contributing author to Juice: The Real Story of Baseball’s Drug Problems and Rob Neyer’s Big Book of Baseball Blunders. He has contributed articles to Baseball Prospectus Online, The Hardball Times, espn.com, and other internet publications. He has combined his legal and baseball knowledge by serving as a legal consultant to the baseball industry on several drug-related cases, including the prosecution of BALCO, Congress’s investigation into steroid use in baseball, and the investigation of Barry Bonds.