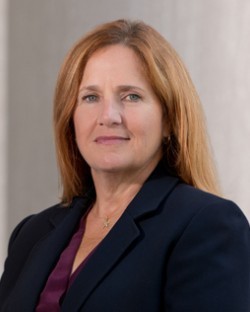 Attorney Felice Duffy served as an Assistant United States Attorney for ten years after beginning her legal career at two prestigious firms (one in CT and one in NY) and then clerking for two federal judges. As an undergraduate, she brought a legal action under the then-new Title IX statute against UCONN to compel the creation of its women’s varsity soccer program. She went on to become a first-team Division I All-American, was selected to be on the first U.S. National Women’s Team, and spent 10 years as Head Coach of the Yale women's soccer team (while at the same time earning her Ph.D. in Education/Sports Psychology).

MY VALUESI grew up with nine siblings in a household where our parents worked hard to treat all of us equally. No one was better than the others and no one was favored over the others. We were also taught to see the world that way – to not play favorites and to not judge others. So fairness and treating people with respect are central to my personal value system.

Finally, more than half of my siblings became accomplished team athletes. You can read more about my sports background here, but four highlights include: filing an action against UCONN under the then-new Title IX statute as an undergraduate to compel the creation of a woman’s soccer program, being selected as a Division I First Team All-American in soccer, being named to the first Women’s U.S. National Soccer team, and serving as Head Coach of the Yale Division I Women’s Soccer Team. I share this with you because that inner fire of competitiveness and teamwork continues to drive me as a lawyer.

I bring these qualities to every client and every case I take because it’s who I am and how I practice law.

My clients are up against institutions with significant resources behind them, whether the state or federal government with its prosecutorial and law enforcement agencies or colleges and universities. So my clients need a strong advocate to level the playing field and make sure their rights are wisely and vigorously defended.MY LEGAL CAREERMy experience in a variety of legal settings gives me an invaluable perspective that I leverage on behalf of my clients every day.

Upon graduating law school, I worked briefly for a large Connecticut firm before accepting a position to serve for two years as a law clerk to federal district judge the Honorable Stefan R. Underhill, where I learned about criminal and civil cases from a judge’s perspective I then worked for two years as a litigation associate at Sullivan and Cromwell in New York where I represented clients on white collar criminal defense, regulatory issues and complex litigation I came back to Connecticut to build my career at another major firm only to be offered a position as a federal prosecutor in the U.S. Attorney’s office, which I accepted in 2005.

FORMER ASSISTANT UNITED STATES ATTORNEYOver my ten years as a federal prosecutor, I handled a wide variety of criminal investigations and cases, from white collar fraud to drug and gun cases. I worked closely with the major federal law enforcement agencies and appeared in federal court hundreds of times, including being lead counsel in numerous criminal trials.