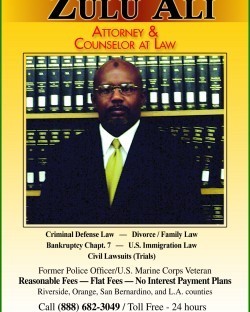 Personal Injury Lawyer
Law Offices of Zulu Ali
Riverside, CA
About Résumé Reviews Contact
Not Yet Reviewed Review this lawyer
Is this you? Showcase your career achievements and connect with ideal clients.
Premium Placement
Enhanced Features
Upgrade to Enhanced Profile

Zulu Ali is an attorney, educator, and activist. A former police officer and U.S. marine, he earned a doctorate in law (J.D.) from Trinity Law School; a masters in business (M.B.A.) and administration of justice (M.S.) from University of Phoenix; a liberal arts degree with a concentration in African studies from Regents College through a consortium with Tennessee State University; and police officer certification (P.O.S.T.) from the Tennessee Law Enforcement Training Academy.Ali is a trial and appellate lawyer in private practice with a focus on representing those accused of crimes, immigrants, and those seeking civil justice. With law offices in southern California, Ali has been admitted to the California State Bar (all state courts), United States District Courts (Central and Southern Districts of California), United States Court of Appeals (Ninth Circuit), and United States Supreme Court. Inspired by former Supreme Court Justice and civil rights attorney Thurgood Marshall and civil rights attorney Avon Williams, Jr., Ali specializes in difficult cases involving human rights issues and matters that provide an opportunity to challenge and change law, through the courts, when the law is unjust. Like those who inspired him, his effort to challenge and change unjust laws has subjected him to immense judicial scrutiny.Ali teaches and lectures at institutions and forums on religious rights and criminal and civil justice issues. Ali serves on the Board of Directors for the W.E.B. Dubois Institute in Riverside, California, a nonprofit institution committed to mentoring and providing services to at risk youth and the Advisory Board of the Muslim Legal Defense Fund of southern California. Ali was born and raised in central Tennessee, where he attended public schools and excelled and lettered in football before enlisting in the U.S. Marine Corps and serving on active duty with the Marine Security Forces. Ali has traveled to countries in Africa, Europe, and Asia; and completed the Hajj-Pilgrimage in Mecca, Saudi Arabia. Ali and his wife, Charito, have been married for over 28 years, have four children, and currently reside in southern California.