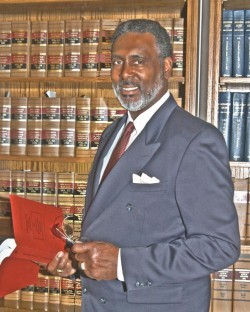 Morris W. Thompson has been fighting injustice, in society and the legal system for over 35 years.

As a high school student, he was selected as one of the first black male students to integrate Hall High School in Little Rock, Arkansas in 1961. That number grew from seven black students in his first year, to twelve by the time he graduated in 1965.

This commitment to social change was instilled in him by his parents and demonstrated continually throughout his early teen and young adult years, culminating with his decision to take his older brothers place in the selective service draft, and enlist in the Army.

After leaving the Army and returning to the United States, his commitment to fighting social wrongs and making a difference in the lives of others, inspired him to pursue a career in counseling, which resulted in him enrolling in college at Creighton University in Omaha Nebraska in 1971.

After graduating from Creighton University with his degree in Psychology, Morris began working as a counselor at the Omaha Opportunities Industrialization Center (OOIC). At the time, OIC of America provided a learning environment with a focus on job preparation training for young adults. Morris’s interest in the legal system grew while working with these students on various community related projects on behalf of the OIC during this time, and in support of his students, Morris would often go to criminal court appearances with some of his students who had run ins with local law enforcement, hoping his support would convince the Judge to grant leniency in their cases.

He soon came to the realization that if he went to law school he could better represent people in the community against a biased judicial system. So he decided to enroll in Creighton University’s Law School, and graduated three years later, in 1980.

After graduating from law school, Morris decided to return home to Little Rock to start his legal career, which would eventually lead to over thirty years of active service to the community, both professionally and personally.

In a very real sense, his motivation to help underrepresented and underserved members of his community, combined with his passion for the law, continues in his work today. His current focus is helping protect and defend people during the most compromising times of their life. This includes those dealing with the criminal justice system, employment discrimination, police brutality, government misconduct, social security administration matters and personal injury cases.

Morris W. Thompson is licensed to practice before the United States District Court, 8th, 5th, and 10th U.S. Courts of Appeals, U.S. Supreme Court, and all state Courts in Arkansas. As a skilled trial attorney, a former judge and a champion of civil rights, he has the perfect combination of experience and knowledge combined with empathy and compassion, to deliver effective representation in almost any criminal or civil litigation matter.