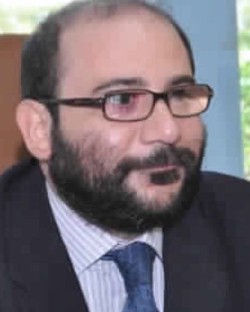 Mr. Hossameldin Abdelkarim, founder of H. Karim & Associates, has a diverse range of legal exposure. He is licensed to practice in the State of New York and the District of Columbia as well as in Egypt.

Before he moved from Egypt to work in the USA, Mr. Abdelkarim’s practice focuses on banking and finance, although his experience also extends to the fields of securities’ market regulations, mergers and acquisitions, private equities and securities litigation. He developed this expertise through his time as General Legal Counsel for HSBC Bank Egypt and as Legal Consultant to the Chairman of the Egyptian Regulator of the Capital Market (Egyptian Financial Supervisory Authority) In addition, while serving at the National Bank of Abu Dhabi in the United Arab Emirates, he obtained considerable regional experience pertinent to these areas.

With HSBC, Mr. Abdelkarim was responsible for the Litigation Department, Retail Banking and Wealth Management Department as well as the Commercial and Global Banking Department. In addition, the Legal Function had oversight over the Securities Brokerage arm of the Bank which is a wholly owned subsidiary. Supervising 14 lawyers, I was responsible for reviewing the litigation docket of the Bank and deciding customers' cases to be settled and cases to be litigated. My duties also included close monitoring of the Human Resources Function whereby I had direct involvement in internal labor controversies, investigations and cases. I served as the special Legal Advisor for the Bank's Mutual Fund and was responsible for its governance and regulatory aspects. I was a member of the Bank's Executive Committee, Risk Management Forums and the Board of Directors Risk Committee and the Audit Committee locally in Egypt. On the MENA level, I was member of the Legal Risk Committee and the Regional Legal Executive Committee.

The extensive experience Mr. Hossameldin possesses is built on a dedication to education and a strong academic foundation. He was especially prodigious in his early educational years, obtaining two BAs from Cairo University: one in Economics and Political Science and the other in Law, in 1992 and 1997 respectively.

In May 2002, he graduated from Georgetown University Law Center, where he studied US Securities and Financial Regulations.

He is a holder of the J. William Fulbright Foreign Scholarship Board & The Bureau of Educational and Cultural Affairs of The United Stated Department of State Award Date: 2002

Mr. Abdelkarim is listed on FINRA Roster of Non-public Arbitrators since December 2018.

Arbitration TrainingsFINRA Trainings:Understanding the Prehearing StageNew Online Civility TrainingDuty to Disclose online mini-courseDiscovery TrainingSuspicious Activities and Anti-Money LaunderingMotion to Dismiss TrainingExplained Decision TrainingNew Chairperson TrainingOnline Basic Panel TrainingExpungementOther:Arbitration Training at the International Court of Commercial Arbitration -ICC Paris.Board Directorship:He is currently an Independent Board Member on the Board of Directors of the Industrial Engineering Company for Construction and Development (ICON), which is a publicly listed company on the Egyptian Stock Exchange.

Dear Sir, I would like to be acquainted with you for handling the Immigration Matters, I will go for long conversation over an email if you feel interest in the said matter. From, Md. Mahfuzur Rahman Khaled,Ph.D Dhaka, Bangladesh, WhatsApp No. is 008801889999987
Read More Reviews