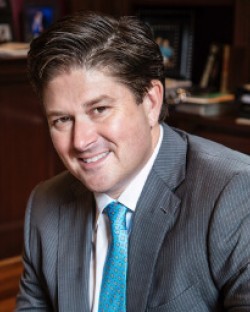 As founder and Managing Partner of The Potts Law Firm, Derek Potts focuses his casework on complex litigation and trials, including mass torts, pharmaceutical matters, and medical device cases. He has become a respected name among the legal community, serving in various national litigation leadership roles, speaking at numerous seminars throughout the country, and obtaining landmark jury verdicts and settlements for his clients.

His impressive list of awards and honors includes recognition among the Top 100 Trial Lawyers by The National Trial Lawyers, being selected as one of the Best Lawyers in America and being named Best of the Bar by the Kansas City Business Journal and American Lawyer Media, and Martindale-Hubbell granted him the title of Top Rated Lawyer in Mass Torts in 2013.

Mr. Potts attended William Jewell College, where he earned his Bachelor of Arts in History. His scholarship earned him admittance into Phi Alpha Delta, the largest co-ed professional law fraternity in the country. He was also named a member of Mortar Board, a national honor society recognizing outstanding students. After college, he pursued his Juris Doctor at the University of Missouri-Kansas City School of Law, where he made the Dean’s List, participated as a member of the National Appellate Advocacy Team, and received the Judge Conrad B. Duberstein Appellate Advocacy Award.